Electrical Problems? Nobody Wants Them!

We will Ensure that the Property is Fully Inspected leaving Nothing Uncovered. We have Designed our Inspections to be Interactive and Educational and Encourage You to be Present for the Entire Inspection.
Get Started 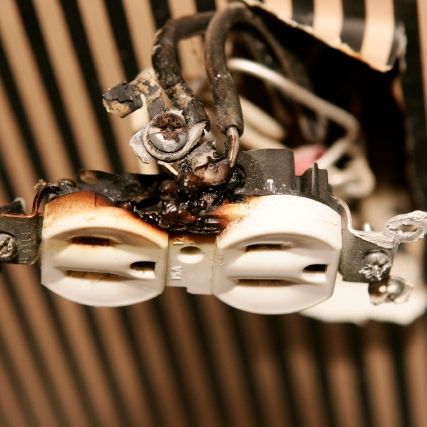 A House that has faulty wiring can be risky.

Some of the most dangerous electrical hazards include:

Knob and tube wiring (sometimes abbreviated K&T) was the earliest standardized method of electrical wiring in buildings, in common use from about 1880 to the 1930s. It consisted of single insulated copper conductors run across interior walls or within ceiling cavities, passing through joist and stud drill-holes via protective porcelain insulating tubes, and supported along their length on nailed-down porcelain knob insulators. Where conductors entered a wiring device such as a lamp or switch, they were protected by flexible cloth insulating sleeving. The first insulation was asphalt saturated cotton cloth, then rubber became common. Wire splices in such installations were twisted for good mechanical strength, then soldered and wrapped with friction tape (asphalt saturated cloth), or made inside metal junction boxes.

The common problem lies when insulation or combustible materials prevent heat dissipation, Insulating an attic with Knob and Tube wiring is a recipe for disaster.

Aluminum wires have been implicated in house fires in which people have been killed, although there are no confirmed cases. Reports of fires with aluminum wiring generally show that poor workmanship led to the failure. Poorly made connections were often the cause. There were several possible reasons why these connections failed. The two core reasons were improper installation and the difference between the coefficient of expansion between aluminum wire and the terminations used in the 1960s.

Most metals (with a few exceptions, such as gold) oxidize freely when exposed to air. Aluminum oxide is not an electrical conductor, but rather an electrical insulator. Consequently, the flow of electrons through the oxide layer can be greatly impeded. However, since the oxide layer is only a few nanometers thick, the added resistance is not noticeable under most conditions. When aluminum wire is terminated properly, the mechanical connection breaks the thin, brittle layer of oxide to form an excellent electrical connection. Unless this connection is loosened, there is no way for oxygen to penetrate the connection point to form further oxide.

Aluminum’s coefficient of expansion varies significantly from the metals common in devices, outlets, switches, and screws that were used before mid 1970s. Many terminations of aluminum wire installed in the 1960s and 1970s continue to operate with no problems. However, many connections were not made properly when installed. Since the aluminium and steel both expand and contract at different rates under thermal load, these loose connections began to grow progressively looser over time. Likewise, a connection made with too much torque causes damage to the wire. Over time, this cycle results in the connection loosening slightly, overheating, and allowing intermetallic steel/aluminum alloying to occur between the conductor and the screw terminal. This results in a high-resistance junction, leading to additional overheating. Although many believe that oxidation was the issue, studies have shown that oxidation was not significant in these cases. If the connections had oxidized, most likely the connection would simply have failed rather than continue to conduct electricity and overheat.

Another issue is the joining of aluminum wire to copper wire. As aluminum and copper are dissimilar metals, galvanic corrosion can occur in the presence of an electrolyte and these connections can become unstable over time. Special connectors have been designed for the purpose of joining aluminum to copper wire, such as the Marrette No. 63 and No. 65 and the Ideal Twister No. 65. These twist-on wire connectors use a special antioxidant paste to prevent corrosion of the connection. It should be noted that a listed connector should always be used for connecting aluminum to copper wire.

Although aluminum wire smaller than 8AWG is not used in new house wiring, lots of aluminum wires are used all over North America. The larger sizes offer excellent options for terminations, since the most common termination in larger sizes is a dual-rated lug made of an aluminum alloy. Properly terminated aluminum wiring should be regarded as safe, since long-term installations have proven its reliability. Aluminum wire is often used in residential applications for service entrance and large branch circuit loads such as ranges and air-conditioning units.

There are several “upgrades” that are commonly done to homes with pre-1974 aluminium branch circuit wiring:

Ensuring that all devices are rated for use with aluminium wire. Many are not, since they do not meet the CO/ALR specification.

“Pigtailing”, which involves splicing a short length of copper to the original aluminium wire for use with devices not CO/ALR rated.

COPALUM, a sophisticated crimping system that creates a cold weld between copper and aluminium wire, and is regarded to be a permanent, maintenance-free repair. These connections are sometimes too large to be installed in existing enclosures.

Completely rewiring the house with copper instead.

When deciding to repair or replace any electrical installation, a qualified professional should be consulted. The majority of homes wired with the general purpose circuits wired with aluminum are now over 30 years old. The likelihood of experiencing any problems unique to having aluminum wiring is slight.

ANY electrical system should be evaluated every 10 years by a qualified professional to determine if it is likely to operate safely under the increased loads in different rooms being used differently, e.g., home office or bathrooms with larger hair dryers.

These panels are well known amongst Electricians and are abundant in Southern California. Studies have shown that the StabLoc circuit breakers do not “Trip” in an overload situation. Typically the circuit breakers face opposite each other and makes for a very difficult removal of the dead front cover. These panels are always identified in your inspection as a fire hazard.

SAFETY WARNING – FATAL SHOCK HAZARD -Unless you are a licensed inspector or electrician, DO NOT REMOVE ELECTRIC PANEL COVERS, DO NOT INSERT TOOLS INTO ELECTRIC PANELS, DO NOT TOUCH LIVE ELECTRICAL PARTS such as screws, buses, bare wires, or anything that is inside of the electric panel.

The inherent problems exist with electrical panels when new and higher demanding loads are placed on an existing system. When aluminum bus bars are present in an older Zinsco/Sylvania System we will document and recommend that it be replaced.Under sizing and lack of adequate circuits are amongst several defects found in these older systems. More and more parts are becoming harder to find and even harder to find someone who will repair it. With all of the high tech electronics and toys today, don’t risk a fire for human safety with an outdated panel. We will inspect your home and determine what type of electrical system you have and document repairs as necessary.